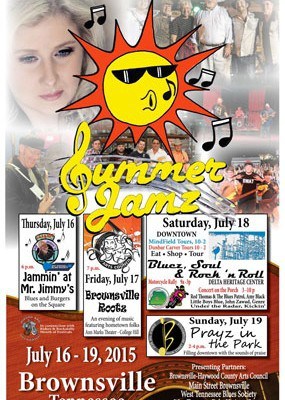 BROWNSVILLE TN (JULY 2, 2015): As part of Brownsville’s city-wide Summer Jamz Music Festival, the Delta Heritage Center will present an expanded Concert on the Porch Saturday, July 18. The event will include a motorcycle rally and live “Blues, Soul & Rock ‘n Roll” music from the porch of the Sleepy John Estes home.
Festivities begin Saturday morning at 9 a.m., with motorcycle enthusiasts invited to participate in the Summer Jamz Rally that will take them along the Cotton Junction Trail to attractions and destinations across northwest Tennessee. There is no entry fee and riders will receive points for photo documenting themselves at designated locations. High scorer will receive a trophy and bragging rights and all finishers will have a chance for prizes.

Music begins at 3 p.m., and features six bands from across the region beginning with Red Thomas and the Blues Patrol. Jeff “Red” Thomas is a Jackson Tenn., native who started playing in blues bands while living on the coast of South Carolina. After returning to West Tennessee, his band has won multiple competitions and competed at the International Blues Challenge.

The Muscle Shoals Revue features Amy Black, an Alabama native who grew up in Boston and released her first CD in 2011. “The Muscle Shoals Sessions” is her third solo release and was recorded at the famous FAME studios in Muscle Shoals. Her project includes original works that pay homage to the icons who inspire her such as Etta James, Mavis Staples and Aretha Franklin. Black describes the revue this way, “It’s fiery music that’s called soul for a reason because it reaches down into your soul.”

Little Boys Blue was formed in 1993 by Jimmy Taylor and Steve Patterson. Since then the group has entrenched itself in a mixture of electric, acoustic country blues, R&B and Americana roots music. They have toured the country over the years playing at major festivals and venues.

The Genre Band is a family-oriented group based in Dyersburg, Tenn., who performs multiple styles of music such as Blues, Rock and Funk. The band has performed at many events and festivals in Tennessee and Kentucky.

The youngest group to perform is Under the Radar. Comprised of Zeke (11), Matt (11) and Ryan (12), who say they “just want to rock.” Even at this young age they have performed at major festivals and in front of large audiences, won a Battle of the Bands competition and performed on live TV since forming in 2014. They are talented and driven.

Headlining the evening will be local band Kickin’. These guys have been playing together since teenagers in Brownsville. There repertoire includes songs from the 1960s to the present. The band trio includes Bruce Steele, Ray Joyner and Bobby Rogers.

Bleacher seating is available, but attendees may also want to bring lawn chairs or blankets for added comfort. Concessions will be on site. For more information, contact the Center at 731-779-9000 or visit www.westtnheritage.com.