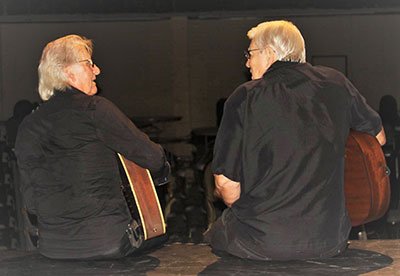 BROWNSVILLE TN (February 4, 2020): Before he was Conway Twitty, he was Harold Jenkins and The Rockhousers. Two original members of the “Rockhousers” will perform Saturday, February 8, during the Tennessee Songwriters Week event at the Delta Heritage Center. Jimmy ‘Luke’ Paulman and Billy Weir will serve as judges for the event before performing a set of their favorite songs. The event begins at 3 p.m.

Jimmy ‘Luke’ Paulman wrote the first song recorded by Conway Twitty on the Mercury label titled “I Need Your Loving.” He later joined Ronnie Hawkins and the Hawks, of Canada, which would be given the name “The Band.” Led by his lifelong friend and neighbor, Levon Helm. Paulman has been honored and eulogized in the third verse of the million-selling song, “The Weight.” He is known as a Sun Studio musician, appeared on Dick Clark’s American Bandstand, and is a Member of the Rockabilly Hall of Fame.

Billy Weir is a drummer, the first drummer for Conway Twitty, and later travel with the Elvis Presley Band while Elvis was in the army. Weir has been a back-up musician for numerous other artists and listed as one of the five great “Drums at Sun.” He writes music, has authored two books, and has been singing and performing since the 70’s after his friend Conway Twitty recorded demos that led to a Nashville release. Billy is also a member of the Rockabilly Hall of Fame.

As a special treat for attendees at Saturday’s songwriting event, Paulman and Weir will present a set of their favorite songs following the competition. Both are writers, performers, and remain active in producing and recording music. Each have released their own CDs and their names are recognized worldwide. Their most recent collaboration has resulted in a soon-to-be-released vinyl EP of original songs.
For more information about the event, call the Center at 731-779-9000.

About the Center: The West Tennessee Delta Heritage Center, in Brownsville, is a music heritage destination that offers a refreshing Southern experience showcasing the history and culture of rural West Tennessee. Inside visitors can learn about the history of cotton, explore the scenic and “wild” Hatchie River and get to know the legendary musicians who call West Tennessee home. Also located on the grounds is the Tina Turner Museum at Flagg Grove School, the childhood school of Tina Turner, and the last home of Blues pioneer Sleepy John Estes. The Delta Heritage Center is also a featured stop along the Americana Music Triangle connecting Nashville, Memphis and New Orleans. To learn more about the Center, visit www.westtnheritage.com or call 731-779-9000.